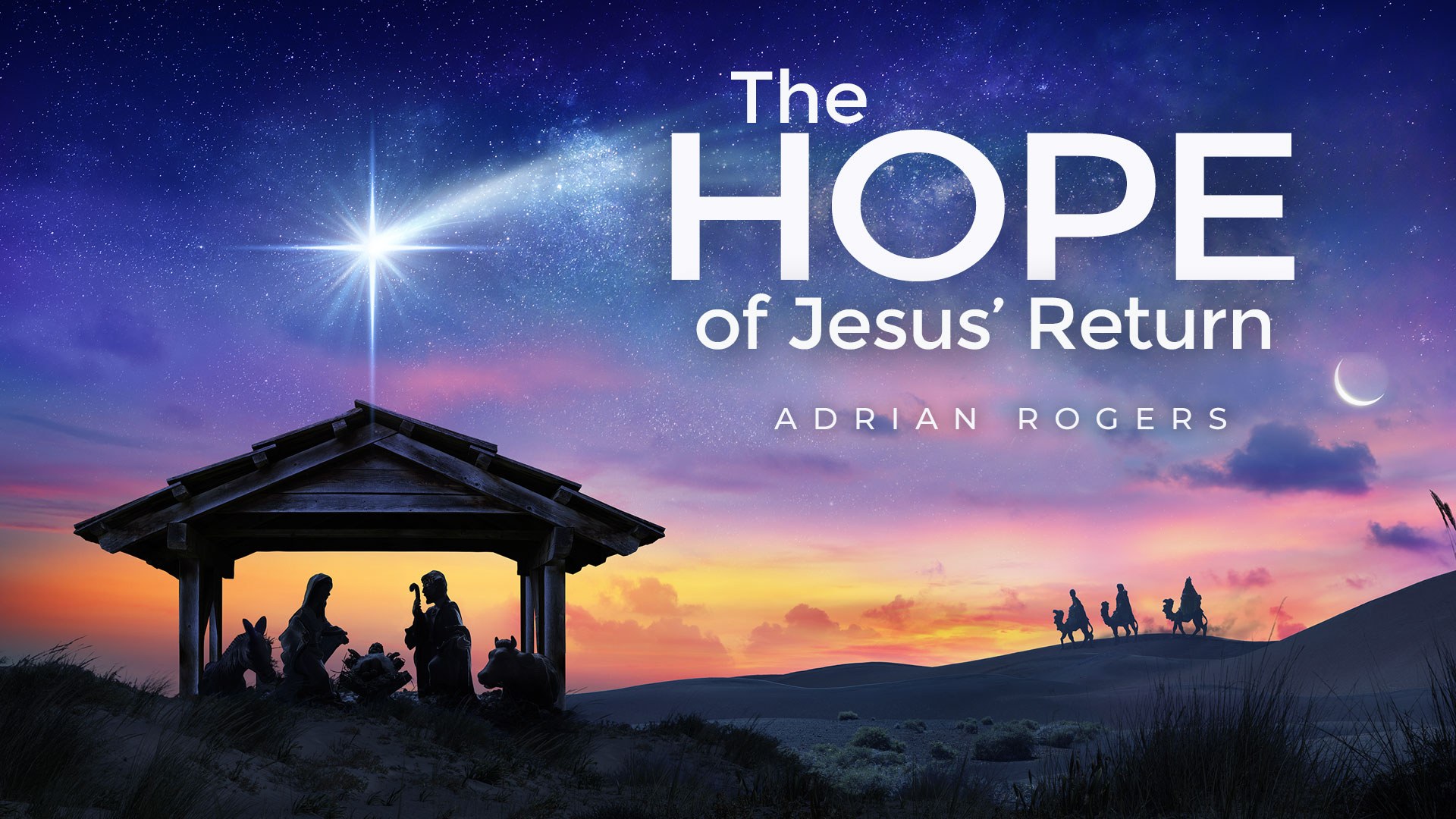 The Hope of Jesus’ Return


This article is based on Pastor Adrian Rogers' message, The Unfinished Story of Christmas.

Christmas is the story of the eternal God, in the Person of Jesus Christ, leaving Heaven’s glory, coming to Earth, taking on human flesh, and living among us, one day to become our sacrifice for sin by His death on the cross. But the story is unfinished if it ends there. The meaning of Christmas isn’t complete until you understand that the Christ of Christmas is coming again.

His incarnation isn’t the whole story. His coronation day lies ahead. The incarnation without the coronation would be like east without west, like an engagement without a marriage. Christmas is wonderful, but the best is yet to be.

Our Heavenly Father has so much more for us when Jesus comes again. Without His Second Coming, the story of Christmas is unfinished. We focus at Christmastime on the little baby in the manger who came to die for our sins—and we thank God for that—but that’s only the beginning of redemption’s story.

Jesus’ First Coming and Second Coming are linked together. Every word of what the angel said to Mary about Jesus’ birth in Luke 1:28-31 was fulfilled literally. But in Luke 1:32-33, he also told her what else was and is to come: “He will be great and will be called the Son of the Highest; and the Lord God will give Him the throne of His father David. And He will reign over the house of Jacob forever, and of His kingdom there will be no end.”

He told her of the Jesus who not only would redeem but also will reign; the One who comes the first time, but then comes again to rule from the throne of His ancestor, David.

The most glorious fact of both past and future is that Jesus came before and is coming again. The one sure hope for this broken world is the Second Coming of Jesus Christ.

Imagine what it would be like without the resurrection, the Rapture, and the Second Coming of Jesus. Every funeral, instead of being a time to comfort one another, would be a time to mourn our eternal hopelessness.

How terrible it must be to be an atheist. What do atheists do in times like that? Is this all there is? Do we just die and go into the ground and that’s it? No! Jesus is coming again.

Paul had assured the Thessalonians of Jesus’ return in his first letter: “For the Lord Himself will descend from heaven with a shout, with the voice of an archangel, and with the trumpet of God. And the dead in Christ will rise first. Then we who are alive and remain shall be caught up together with them in the clouds to meet the Lord in the air. And thus we shall always be with the Lord” (1 Thessalonians 4:16-17).

Think of the contrast between the first time Jesus came and the second time.

Remember the glory of that as I point out three things to bring you Christmas cheer in this weary world.

You need not be disturbed.

Are you troubled today? Listen, it’s not over yet. Be at ease. There’s an unfinished story.

Paul tells us in 2 Thessalonians 1:7, God will “give you who are troubled rest with us.”

You say, “Pastor, it’s so dark.” Yes, it’s gloriously dark. Today Jesus is despised, rejected, and mocked. But the darkest hour of night is just before sunrise. Our hope is not in politics, sociology, or science. Our only sure hope is the Second Coming of the Lord Jesus Christ.

When we see Jesus, we won’t see a baby with little dimpled feet there in the straw. He will come as the conquering King. For the unsaved, His coming will strike terror. For the saved, it means glory: “He comes, in that Day, to be glorified in His saints” (2 Thessalonians 1:10).

People always ask, “When is He coming?” That’s a proper question because it’s not “if” but “when.” No one knows the date. The Bible forbids anyone setting a date for Jesus’ Second Coming. That time is only known to God. The prophet Malachi said in chapter 4, verse 2, “But to you who fear My name, The Sun of Righteousness shall arise.”

His coming is like sunrise. One thing about sunrise, you can’t hurry it and you can’t stop it. Jesus is coming again, though we don’t know when. One day He will flood the world with the sunlight of His presence. What a day that will be. I can hardly wait for the day when He comes to be the glorified King of kings.

You must not be deceived.

Don’t go around with headline hysteria. The Thessalonians were unsettled by a letter claiming to be from Paul. But it was a forgery, a devilish lie stating they had missed the Rapture, and the Great Tribulation was underway.

Paul wanted them to understand that though they were going through excruciatingly hard times, they weren’t in the Great Tribulation, nor had they missed the Rapture. He opens with these comforting words: “to give you who are troubled rest with us when the Lord Jesus is revealed from heaven with His mighty angels” (2 Thessalonians 1:7).

He wrote Second Thessalonians to clear things up and resettle the people in the truth.

The first century A.D. was just as dark and chaotic as our day—worse even—and Paul reassured them by giving the correct sequence around Jesus’ Second Coming. They certainly hadn’t missed it.

Remember, the Second Coming of Jesus Christ is in two stages: First, He comes secretly in the air for His church (“the Rapture”). Second, He returns sovereignly with His church. Between those two, the Church is in Heaven at, among other events, the Marriage Supper of the Lamb.

Reviewing what we’ve learned, the Christ of Christmas is coming again. 1. You need not be disturbed. 2. You must not be deceived.

You will not be disappointed.

In 2 Thessalonians 2:13-14, Paul says, “But we are bound to give thanks to God always for you, brethren beloved by the Lord, because God from the beginning chose you for salvation through sanctification by the Spirit and belief in the truth, to which He called you by our gospel, for the obtaining of the glory of our Lord Jesus Christ.”

At His Second Coming, Our Lord will reign.

The unfinished story of Christmas is: Jesus is coming again. We won’t be disappointed because He will destroy forever the rule of the Antichrist. Our faith looks backward to a crucified Savior. Our love looks upward to a crowned Savior. Our hope looks forward to a coming Savior.

Do you know Jesus? He is coming to be glorified—He will receive our wonder and awe, “...when He comes, in that Day, to be glorified in His saints and to be admired among all those who believe” (2 Thessalonians 1:10).

Would you believe on Him? I’m not talking about mere intellectual belief. Will you trust Him? Put your faith in Him.

“Lord Jesus, thank You for dying for me. I believe that You’re the Son of God. I believe You paid my sin debt with Your blood on the cross. I believe that God raised You from the dead. And I now receive You by faith as my Lord and Savior. I trust You now. Forgive my sin. Cleanse me. Save me, Lord Jesus.”

Did you ask Him? Then with childlike faith, thank Him by praying something like this:

“Thank You for doing it, Lord Jesus. I receive it by faith and that settles it. You’re now my Lord, my Savior, my God, and my friend. And I will make this public. I will not be ashamed of You, Amen.”

The Unfinished Story of Christmas (2266)

The Unfinished Story of Christmas (2266)