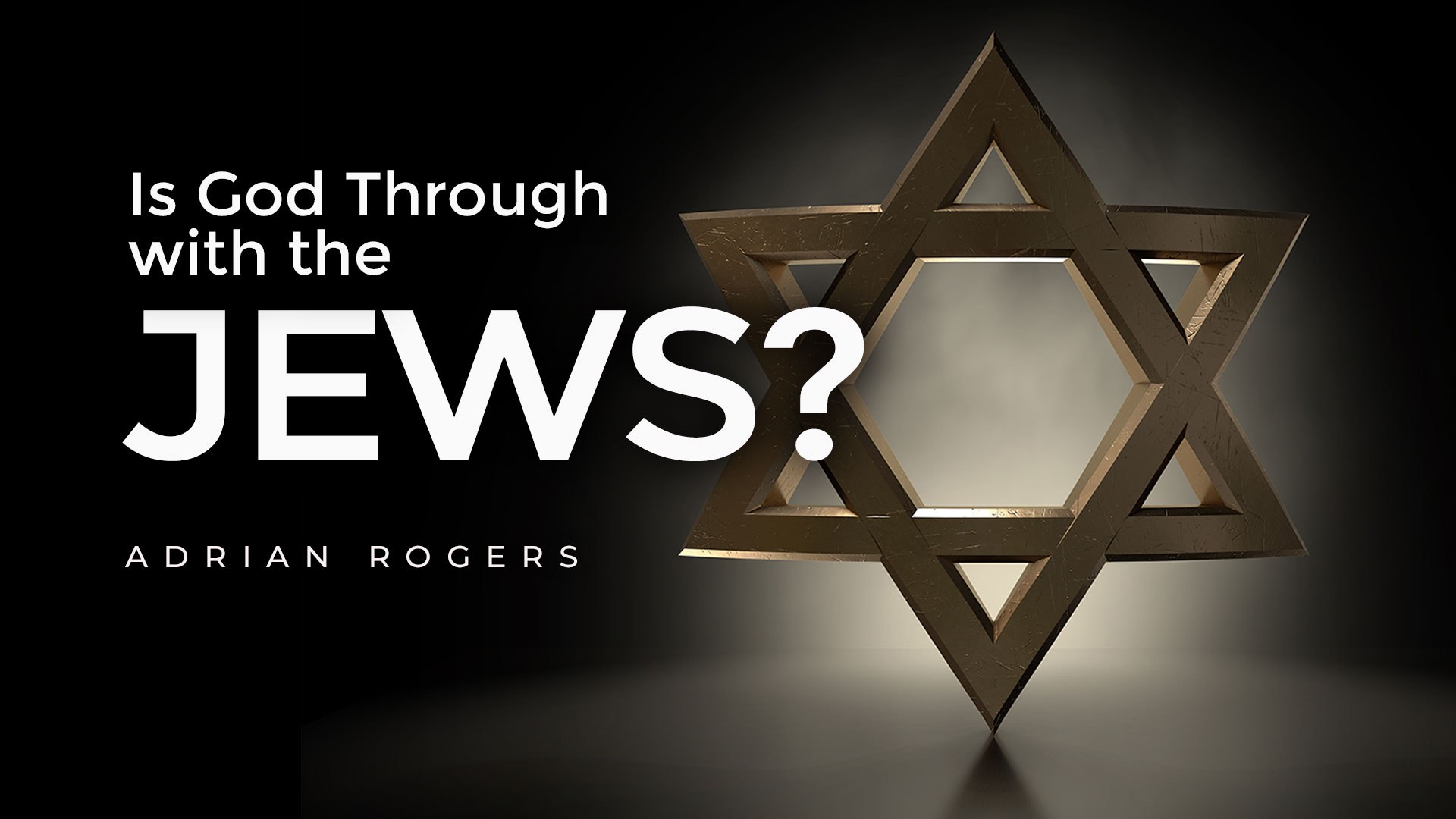 Is God Through with The Jews?

No, God is not through with the Jews, in spite of what some people would have you believe. I have five proofs of that, directly from His Word. The Middle East continues to be the center of great controversy over the land of Israel and who should be living there. The storm clouds of Armageddon are gathering, focusing on Israel and her people.

Peacemakers scramble and politicians plot to bring about what will be in their personal best interests as the world forever wrestles with the problem of the Holy Land.

But only one voice matters—the voice of God, who created Earth and owns it all. What does He say about this unending conflict? After 2,000 years, the Jews, at last, returned in 1948 to the homeland God gave them, though it’s now reduced to a mere sliver of their original land.

As the Jew goes, so goes the world. Israel is God’s yardstick, His outline, program, and prophecy for all other nations. Israel is:

Romans 9-11 makes it clear: God isn’t done with the Jews.

The Jews are still His chosen people. Their failure to receive Jesus doesn’t mean God is done with them. Many Old Testament covenants had conditions, but the one God made with Abraham had none. (See Genesis 12:2-3, 15, and 17:7.) The covenant rested not on man’s performance but on God’s character and His eternal plan.

God’s dealings with Israel throughout history prove the Jews are a God-created, loved, called, elected, and protected people. Neither Washington, Moscow, nor London is Earth’s most important city. Jerusalem, Israel’s capital, is.

That should surprise no one who is a student of Scripture, for Zechariah 12:3 says, “In the last days, Jerusalem will be a burdensome stone for all the nations….” We see this happening now. Nations pressure Israel today to sacrifice her sovereignty and make Jerusalem an international city rather than the capital of God’s ancient people and land.

In Romans 11, Paul gives five proofs God hasn’t cast away His people, broken His promises, altered His covenants, or forgotten His Word. God forbid He would ever do that.

Paul testifies that he’s Exhibit A for proof God isn’t finished with the Jews (11:1). Though Paul was actively persecuting Christians, Jesus Himself appeared to him on the Damascus road, commissioning him as a missionary to the Gentiles. God used Paul, a Jew, to evangelize the pagans of this world.

And that’s just what God is going to do with Israel. He will supernaturally appear to the people of Israel who will see Jesus as Paul saw Him, glorified on high. A nation will be born again spiritually in a day. (See Zechariah 12.) All nations of the world will come against Jerusalem at the beginning of Armageddon, prepared for a final assault.

When it looks dark for His people, as the noose tightens around Jerusalem, (See Zechariah 12:8-9.) God will…

…pour on the house of David and on the inhabitants of Jerusalem the Spirit of grace and supplication; then they will look on Me whom they pierced… (Zechariah 12:10).

Jesus’ hands and feet were pierced upon the cross for the sins of the world. Just as Paul was converted, the people of Israel will turn and embrace their Messiah, the Lord Jesus:

The Jews in that day will see the resurrected, glorified Lord Jesus, just as Paul saw Him on the road to Damascus. As a group, they rejected their Messiah, but Paul asserts that God hasn’t rejected them. Paul became a witness to the Gentile nations; 144,000 Jews will become witnesses to the world (Revelation 7:4).

If you don’t think Israel can come to Christ, you don’t understand the power of God. The same power that convicted the Apostle Paul will bring the people of Israel to Jesus. God still has a place, purpose, and ministry for His people, the Jews, and is actively carrying out His plan for them.

Just as God preserved 7,000 Israelites in Elijah’s day who never bowed the knee to Baal, He likewise has reserved a remnant in Israel by His grace. (See Romans 11:2.) There has always been a remnant of believing Jews and there always will be, because God is the one who preserves Israel.

Also, I will make him [David], My firstborn, the highest of the kings of the earth. My mercy I will keep for him forever, and My covenant shall stand firm with him. His seed [descendants] also I will make to endure forever [note: forever], and his throne, as the days of Heaven (Psalm 89:27-29).

He said that if David’s descendants forsook Him and His law, and broke His statutes and commandments (which they did), He would take them to the woodshed, which He did—over the last 2,000 years. Persecution pursued them wherever they went. Through all of that, He adds in verses 33-37 of Psalm 89:

Nevertheless, My lovingkindness I will not utterly take from him, nor allow My faithfulness to fail. My covenant I will not break, nor alter the word that has gone out of My lips. Once I have sworn by My holiness; I will not lie to David: His seed shall endure forever and his throne as the sun before Me; it shall be established forever like the moon, even like the faithful witness in the sky. Selah. (“Pause and ponder that.”)

They were scattered, but not destroyed. Egypt’s king couldn’t diminish them nor did the Red Sea drown them. Jonah’s whale couldn’t digest them and the fiery furnace couldn't devour them. Haman’s gallows couldn't hang them, nations couldn't assimilate them, nor could dictators annihilate God’s ancient people, the Jews. God always preserved a remnant.

Israel was never supposed to be a reservoir just receiving God’s blessings, but His pipeline through which He would disperse blessings. God told Abraham: “Through you, all the nations shall be blessed.”

When the Jews rejected their Messiah, God sent Paul to the Gentiles, knowing that the Gentiles’ salvation, godly lives, the beauty of the Lord Jesus Christ, and the joy, love, faith, and victory they have in Him, would provoke His own people to jealousy. They would want that same relationship.

God is doing all of this according to His magnificent plan: If He said He would bring pagan Gentiles to Israel’s Messiah, how much more will He keep His Word to Israel and bring them back to Himself?

God made an unbreakable covenant with Abraham, the root of Israel. If Abraham is God’s, then the whole tree is God’s. God will not break His covenant promise.

We Gentiles have simply been grafted into this tree and entered into Israel’s blessings. If God can take unbelieving pagans and graft them into the true olive tree, Israel, He can bring His own people, in His time, back to their true Messiah.

Salvation for both Jew and Gentile is God’s culminating purpose. In His mysterious plan, He had spiritual blindness happen to Israel until the full number of the Gentiles are saved (Romans 11:25).

God is doing this…

God is not finished with the Jews. The same power that convicted Paul will one day convict Israel. God’s preserving power that kept the remnant in Elijah’s day is preserving them today.

Though the Jews rejected Paul’s message, in God’s plan, they’re going to come back.

We’re living in the most exciting time in the history of God’s chosen people. Since the re-creation of the state of Israel, May 14-15, 1948, God has repeatedly intervened to protect them. Prophetic promises are becoming reality.

According to God’s Word, three major events happen just prior to the Second Coming of the Messiah, the Son of David. Two have already occurred:

During those days, they will see Him and ask, “What are those wounds in Your hands?” Jesus will answer, “This is where I was wounded in the house of My friends” (Zechariah 13:6).