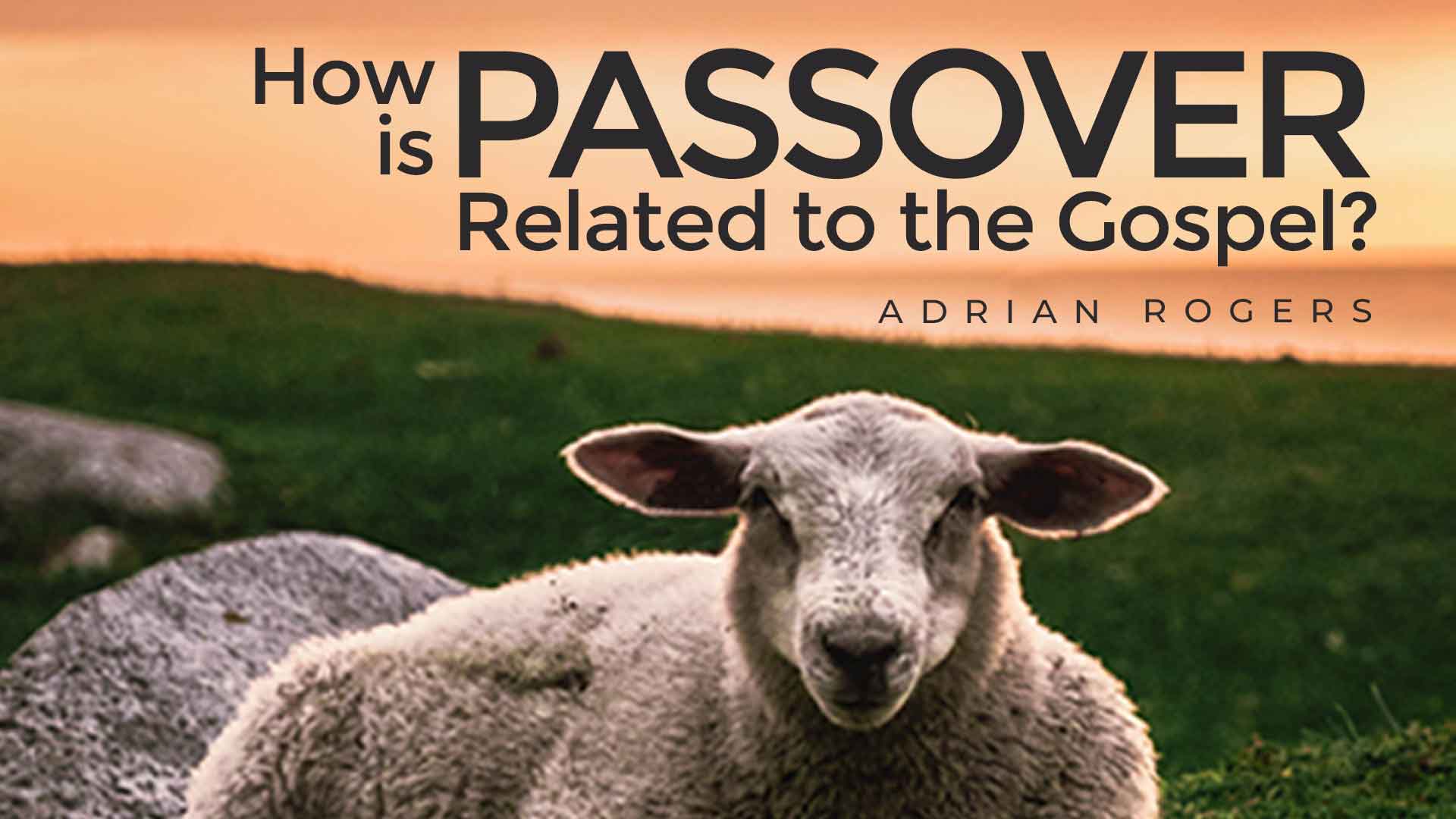 How is Passover Related to the Gospel?


This article is based on Pastor Adrian Rogers' message, Redeeming Faith.

“By faith [Moses] kept the Passover and the sprinkling of blood, lest he who destroyed the firstborn should touch them” (Hebrews 11:28; word in brackets added). The context is this: the people of Israel went to Egypt during a famine, and stayed there. Now they were making bricks as Pharaoh’s slaves. (Read Exodus 1:1-14.)

But God was going to deliver them. He brought them out on a night called Passover. God told the Jews He was going to send the death angel through Egypt, and every firstborn would be slain. But to His people God said, “Take a spotless lamb, and put its blood upon the doorposts of your houses. When the death angel sees the blood, he will pass over you.” (Read Exodus 12:21-24.)

Did you know that Christians celebrate Passover? Easter and Passover are linked.

Calvary was not an afterthought. It was in the mind of God before He swung this planet into space. The Passover lamb in Exodus 12 prophesied Christ, God’s lamb.

It was a spotless lamb.

“Your lamb shall be without blemish…” (Exodus 12:5a). That pictured the sinless Son of God. Each family took its Passover lamb on April 10th and kept it three days, then carefully examined every inch of its skin for any scab or malformation.

It was a sacrificial lamb.

“Now you shall keep it until the fourteenth day of the same month. Then the whole assembly of the congregation of Israel shall kill it at twilight” (Exodus 12:6). Those lambs had done no harm, but they killed them. God was already teaching us that “without shedding of blood there is no remission” (Hebrews 9:22b).

It was a saving lamb.

“They shall take some of the blood and put it on the two doorposts and on the lintel of the houses where they eat it. …And when I see the blood, I will pass over you; and the plague shall not be on you to destroy you when I strike the land of Egypt” (Exodus 12:7,13b).

Each father took the lamb’s blood, and with a branch of hyssop he put blood on the doorposts and lintel—publicly and unashamedly. They could not put the blood in the back room. A spotless, live lamb would have done no good. Salvation is not learning lessons from the life of Christ; salvation is receiving life from the death of Christ.

It was a shared lamb.

“Then they shall eat the flesh on that night; roasted in fire, with unleavened bread and with bitter herbs they shall eat it” (Exodus 12:8; emphasis added).

The lamb was to be roasted with fire, because the fires of God’s wrath would burn themselves out on Christ.

The bitter herbs speak of brokenness. Have you wept over your sins?

Leaven is yeast—it works quietly, in lukewarm conditions. It is an illustration of sin. Passover was to be unleavened.

They were to eat all of the lamb. (See Exodus 12:10.) When you receive Christ, you receive all of Christ. You don’t say, “I’ll have a little Saviorhood, but no Lordship, thank you.”

Except for the preparation of the lamb, no work was to be done. (See Exodus 12:16.) God was teaching us that He saves us not by righteous works that we have done, but by His mercy. (See Ephesians 2:8.)

“And thus you shall eat it: with a belt on your waist, your sandals on your feet, and your staff in your hand” (Exodus 12:11a). That is, this day was not the end; it was the beginning. When you come to Jesus and feed on the lamb, you are getting ready to serve the Lord.

Moses understood that the Passover was prophecy. John the Baptist, Jesus’ forerunner, knew that all of the Old Testament prophesied Jesus. He saw Jesus coming. (See John 1:29.)

We are redeemed “with the precious blood of Christ, as of a lamb without blemish and without spot” (1 Peter 1:19). Have you ever wondered why so much of the gospels are given to Jesus’ last three days? Because God’s lamb was being examined.

Finding a perfect lamb was difficult, so the Jews had a special group of shepherds who bred perfect Passover lambs. They were bred in the fields of Bethlehem—where Christ was born. Come Passover week, the shepherds brought these lambs five miles to Jerusalem, through the Sheep Gate up to the Temple Mount. There, the priests examined the lambs.

At the same, Jesus was coming to the Temple Mount too. We call it Palm Sunday. For His last three days, the Sadducees, Pharisees, Herodians, priests, and civil authorities tried to find some fault in Jesus. But Pilate said, “I find no fault in this Man” (Luke 23:4b).

For three centuries, the Jews had developed a tradition. They would take a bag called a Matzo tash, with three sections in it. In the middle section was unleavened bread. The father would pull out the bread, break it, and give it to those around him.

“Go prepare the Passover feast,” Jesus said to His disciples. “And He took bread, gave thanks and broke it, and gave it to them, saying, ‘This is My body which is given for you; do this in remembrance of Me’” (Luke 22:19).

Do you think all this just happened to come together? Jesus died on the spot that had been prophesied long ago—on bloody Calvary, Mount Moriah. (Read Genesis 22:1-14; John 8:56.)

Levites, priests, and Passover shepherds are not needed anymore—that was all anticipation. Calvary was the consummation. We have the Lord’s Supper to remind us of that.

The Lord’s Supper: the Celebration

Christians still keep the Passover, every time we come to the Lord’s Table. Paul said, “Purge out the old leaven, that you may be a new lump, since you truly are unleavened. For indeed Christ, our Passover, was sacrificed for us. Therefore let us keep the feast…” (1 Corinthians 5:7-8a).

Remember, leaven represents sin. There was to be no leaven in the house when God’s people took the Passover. (See Exodus 12:15.) What is God saying to us? When we come to the Lord’s Table, we must come with clean hearts—with no unconfessed, unrepentant sin.

“For I received from the Lord that which I also delivered to you: that the Lord Jesus on the same night in which He was betrayed took bread; and when He had given thanks, He broke it and said, ‘Take, eat; this is My body which is broken for you; do this in remembrance of Me.’ In the same manner He also took the cup after supper, saying, ‘This cup is the new covenant in My blood. This do, as often as you drink it, in remembrance of Me.’ For as often as you eat this bread and drink this cup, you proclaim the Lord’s death till He comes” (1 Corinthians 11:23-26).

The Lamb has slain the serpent, and we are celebrating.