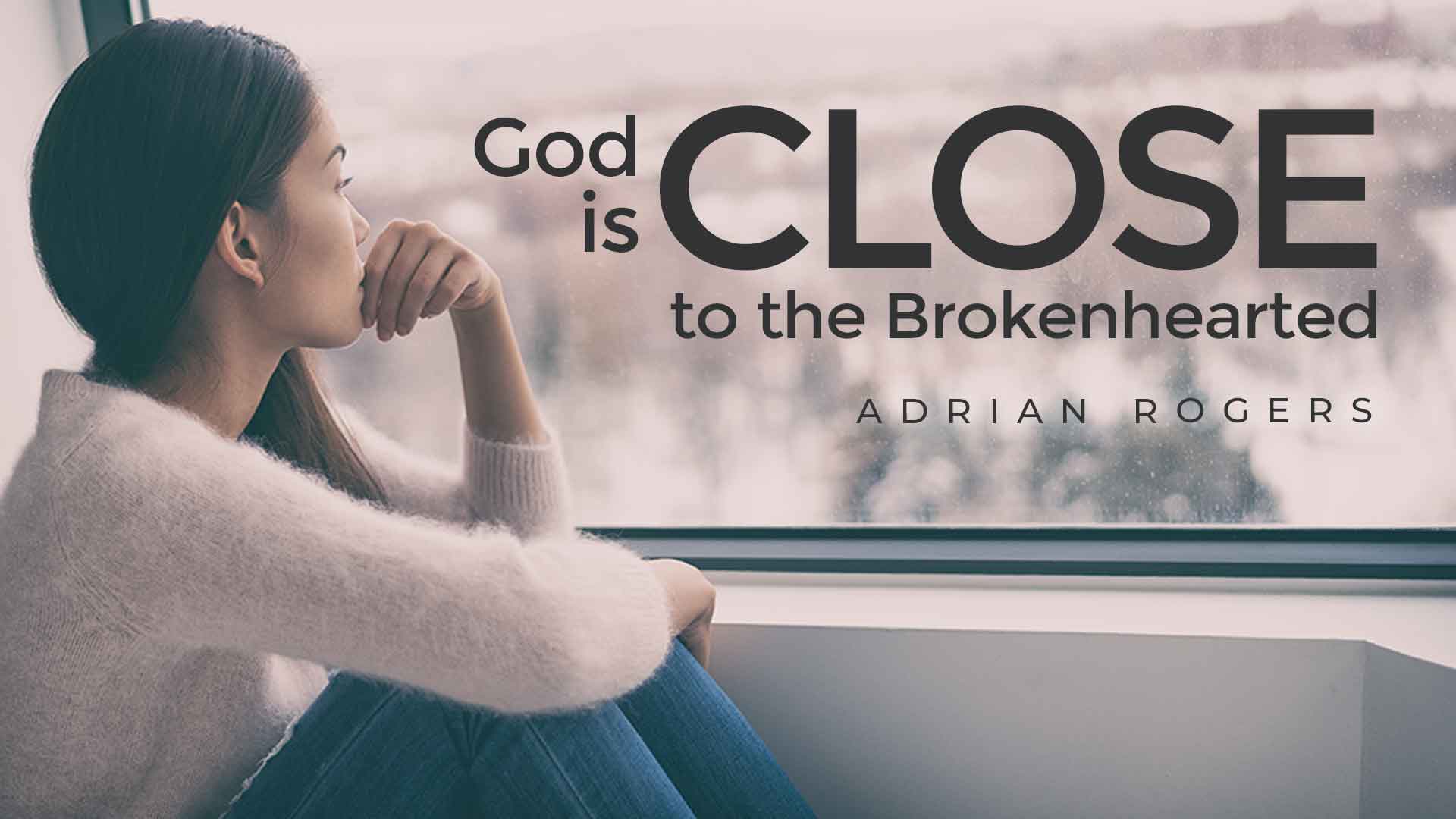 God is Close to the Brokenhearted


This article is based on Pastor Adrian Rogers' message, Strength in Times of Crisis.

It was Passover. Jesus had told the disciples about His coming crucifixion, and His glory. They didn’t understand. Jesus reminded them one more time of His enduring love. Then He had a warning for Simon Peter.

And the Lord said, “Simon, Simon! Indeed, Satan has asked for you, that he may sift you as wheat. But I have prayed for you, that your faith should not fail; and when you have returned to Me, strengthen your brethren.” But he said to Him, “Lord, I am ready to go with You, both to prison and to death.” Then He said, “I tell you, Peter, the rooster shall not crow this day before you will deny three times that you know Me” (Luke 22:31-34).

Satan Will Reveal Your Faults

Satan is real, personal, cunning, and destructive. In Scripture, he is called the devil (which means slanderer), the accuser of the brethren, and the father of lies.

Here, Jesus calls him Satan, meaning enemy. “Satan has asked for you, that he may sift you as wheat” (Luke 22:31b). People sift wheat to reveal the dirt and debris in it. Satan wants to surface your faults so that he can accuse you before Almighty God.

Your Strengths Will Sabotage You

Sabotage is an inside job. Peter was so sure of his own ability. “Lord, I am ready to go with You, both to prison and to death” (Luke 22:33). But Peter sabotaged himself.

Peter was bragging when he should have been trusting. He was naturally aggressive and bold. A lot of people are trying to develop self-confidence today, but that is the one thing we need to lose!

“He who trusts in his own heart is a fool, but whoever walks wisely will be delivered” (Proverbs 28:26).

“The heart is deceitful above all things, and desperately wicked; who can know it?” (Jeremiah 17:9)

If you do not deny yourself, you will deny Jesus.

Peter was sleeping when he should have been praying. Jesus was in Gethsemane:

“And being in agony, He prayed more earnestly. Then His sweat became like great drops of blood falling down to the ground. When He rose up from prayer, and had come to His disciples, He found them sleeping from sorrow. Then He said to them, ‘Why do you sleep? Rise and pray, lest you enter into temptation’” (Luke 22:44-46).

Self-confidence is pride, and pride’s twin sister is prayerlessness. We are quite confident that we can make it without prayer. Prayerlessness is arrogance.

Jesus taught us to pray, “Do not lead us into temptation, but deliver us from the evil one” (Matthew 6:13a). When should we pray this? After we have messed up at the end of the day? No! Pray it in the morning, to keep out of difficulty.

Oswald Chambers said, “An unguarded strength is a double weakness.”

Peter’s strongest point was his self-confidence and fleshly courage.

He jumped into the battle just before he denied Christ. The crowd laid hold of Jesus—“Then Simon Peter, having a sword, drew it and struck the high priest’s servant, and cut off his right ear” (John 18:9a).

What was wrong with that?

Wrong enemy. The devil loves to have you cutting off people’s ears when he is really the enemy. “For we do not wrestle against flesh and blood, but against principalities…” (Ephesians 6:12a)

Wrong weapon. “For the weapons of our warfare are not carnal” (2 Corinthians 10:4a). We are in a battle, and we won’t win it with an economic, political, or military sword.

Wrong energy. He fought a battle in the strength of the flesh, and no wonder he failed, because, “The spirit indeed is willing, but the flesh is weak” (Matthew 26:41b).

Wrong attitude. He was filled with bitterness and wrath. “The wrath of man does not produce the righteousness of God” (James 1:20).

Your Actions Will Surprise You

It is obvious that Peter did not expect to deny Christ. “Therefore let him who thinks he stands take heed lest he fall” (1 Corinthians 10:12). We have this idea: “When it happens to me, I’ll stand true.” But if you are trusting in your own abilities, your actions will surprise you. You’ll find that you are not as strong as you think you are.

So what about Simon Peter? He failed (read Luke 22:54-62), but he learned that failure was not final. Looking back on our lives, we would all have to say, “Dear Lord, I have not been the courageous Christian I should have been.”

Christ Will Secure You

We looked at three truths to challenge you, and here is one that will comfort you. You have an adversary, but you also have an advocate. Look at this! “And the Lord said, ‘Simon, Simon! Indeed, Satan has asked for you, that he may sift you as wheat. But I have prayed for you, that your faith should not fail; and when you have returned to Me, strengthen your brethren’” (Luke 22:31-32; emphasis added).

“My little children, these things I write to you, so that you may not sin. And if anyone sins, we have an Advocate with the Father, Jesus Christ the righteous” (1 John 2:1).

Jesus knows far more about you than you know about yourself. And He still loves you. Your actions will surprise you, but they do not surprise Jesus. God loves us by sheer grace. Jesus Christ prays for us, just as He prayed for Simon Peter. In His High Priestly prayer over His disciples, Christ said, “I do not pray that You should take them out of the world, but that You should keep them from the evil one” (John 17:15).

You might say, “That’s wonderful. He prayed for the twelve disciples, but He didn’t pray for me.” Go to verse 20.

“I do not pray for these alone, but also for those who will believe in Me through their word” (John 17:20; emphasis added).

And Jesus is still praying for you. “Therefore He is also able to save to the uttermost those who come to God through Him, since He always lives to make intercession for them” (Hebrews 7:25).

Why does God allow suffering? Jesus could have stopped Satan from sifting Peter. By this sifting, Simon Peter learned to renounce his self-confidence and to put his confidence in Jesus Christ. This cursing, stumbling, failing Peter became the flaming apostle of Pentecost because Jesus Christ prayed for him. (Read Acts 2.)

How does suffering bring us closer to God?

How can I get closer to God?

How to Practice the Presence of God Booklet