Four Truths about the Leadership Crisis in America 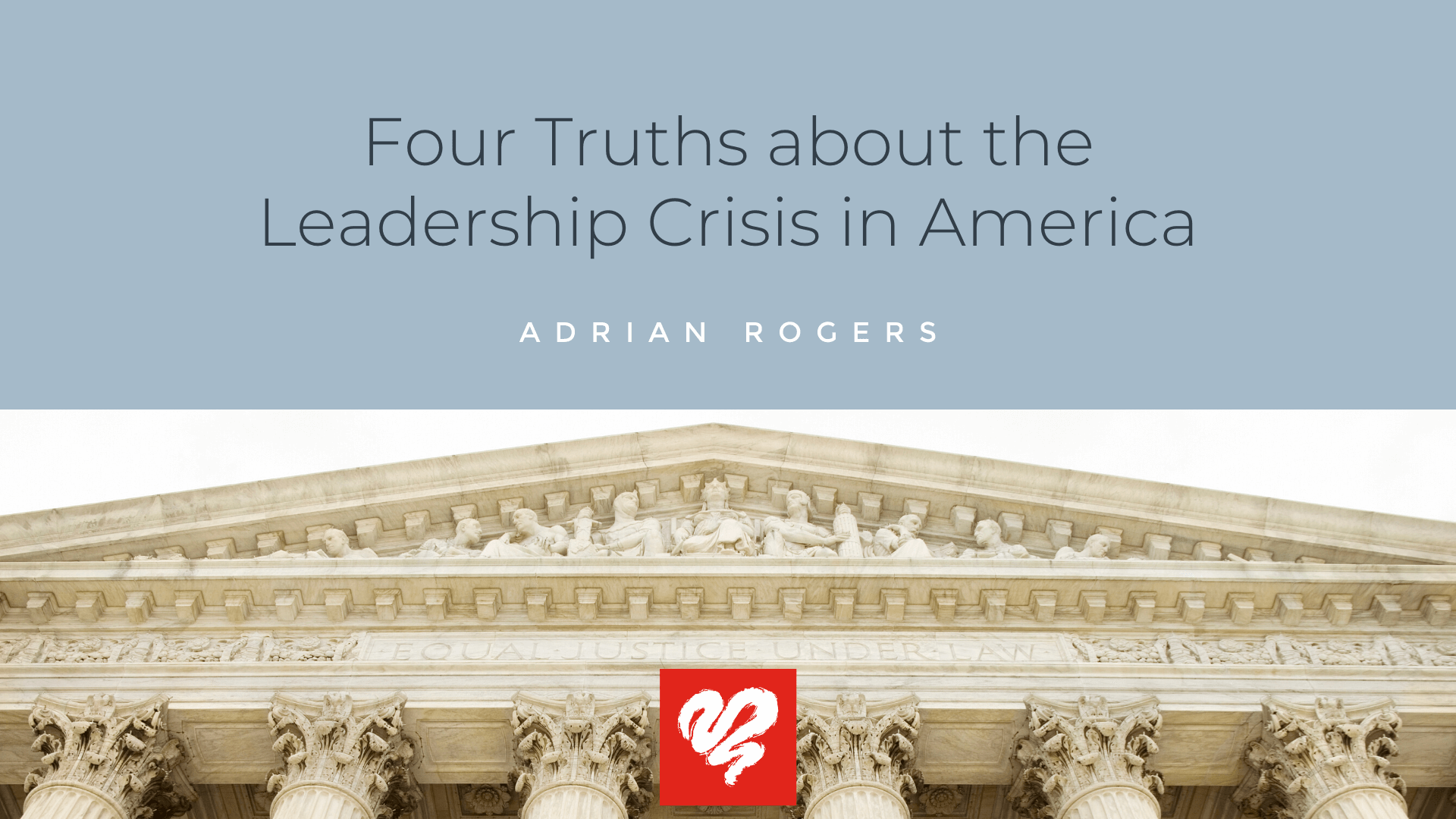 There’s both a moral crisis and a leadership crisis in America. Leadership is crucial. There’s a saying that asks: “If the gold rusts, what shall the iron do?” That is, if our leadership is not what it should be, what will the people be like? God is greatly interested in a nation’s political life. Some say He ought to stay out of government, but the truth is, government must always look to Almighty God.

In November, American citizens will vote. Voting is a privilege, but for the Christian, it’s more—it’s a duty. A nation gets the kind of leadership it deserves. If a Christian willingly does not vote, you disobey God, for Jesus said, “Render unto Caesar the things that are Caesar’s and unto God, the things that are God’s” (Mark 12:17, Matthew 22:21). In America, “Caesar” is a government “of, by, and for the people.” “We the people” are the government. To fail to participate is to sin against Almighty God.

It’s unthinkable that God would have ordained human government and then told His people to stay out of it. Who then would that leave to lead? I’m not naming any names nor mentioning any political party. When I finish, some will accuse me of being partisan, that I’ve talked about parties, but I’m not. I’m giving you principles straight out of the Word of God. Apply them as you wish. And if anything is partisan, the Bible will be partisan. Watch very carefully. I want to lay four important truths on your heart:

I’ve heard people say, “What difference does character make? Character is rooted in God’s principles. A leader without character will contaminate whatever he touches. If you say character doesn’t count, you’re really saying God doesn’t count. “God, we can get along quite well without Your blessing. We’re going to do it ourselves.”

Straight from God’s Word, here are the principles God says a leader should have. Get these fixed in your heart and mind.

Leadership is really stewardship because the leader acts for God. Romans 13:4 calls a leader “a minister of God.” Psalm 148:11-12 and Proverbs 16:12 emphasize that a ruler’s “throne” is “established in righteousness” and how important it is for a ruler to worship God. An ungodly man or woman is unfit for leadership.

Proverbs 8:12-16 lists the character traits God wants in a leader and plainly states that true wisdom comes from godliness and righteousness.

What’s more important: for a leader to be smart or be wise? How much better one who is wise! Wisdom is the gift of God. I pray God will give America wise leaders. But a leader cannot have wisdom from God unless he’s under God in service and worship.

When I vote, I’m looking for a man or woman who is godly and who has real wisdom, not one who leads by seeing which way the wind is blowing or goes by the polls. President Harry Truman, talking about polls, asked, “I wonder how far Moses would’ve gone if he had taken a poll in Egypt?” What would Jesus Christ have preached if He had taken a poll in Israel? Would the Reformation have happened if Martin Luther had taken a poll?

Liars and leaders are not the same. If he/she is a liar, they shouldn’t be elected, and they can’t be a person who listens to lies, either, for the Bible says, “If a ruler pays attention to lies, all his servants become wicked” (Proverbs 29:12). Men and women with fortitude and honesty, guided by what’s right, make history.

If a leader isn’t discriminating enough to choose the right people to accompany him and godly people to lead alongside him, he is unfit to lead. If he surrounds himself with wicked people, his throne will not be established in righteousness. A leader is known by his inner circle. Who does he listen to for wisdom?

Willingness to protect the weak (Proverbs 31:8-9)

When someone is in peril and cannot speak for themselves, the king should speak for them. If a leader does not have a protective spirit, he’s missed the reason for being a leader. God gives us leaders to protect us from evil people. Leaders should be defenders of those who cannot defend themselves. That is particularly true of innocent unborn babies. Some laws are evil in the sight of God. In Jeremiah 22:3-5, God says through Jeremiah to the king, “If you shed innocent blood, God swears by Himself that He is going to destroy your nation.”

Some things may be legal but not right before Almighty God. Wicked people may make wicked laws, but that doesn’t make them right. And there’s nothing politically right that’s morally wrong. A leader must stand up for the innocent and defenseless. (See also Psalm 94:20-21 and Habakkuk 2:12)

Never say character doesn’t matter. You cannot expect God to bless iniquity. He cannot and will not.

2. God Respects Your Ability to Choose

God allows you to choose against His will, as He did the people of Hosea’s time:

When voters choose evil, self-serving, power-mad leaders, or when the level of wickedness within a nation becomes so great, God will turn it over to unrighteous leaders who bring hardship and calamity. Wicked rulers are God’s reward for wicked people. America will get the kind of leadership we deserve.

Remember when the people of Israel wanted a king? Samuel the prophet said, “You don’t need a king right now.” They insisted, “Oh, we want a king.” Samuel answered,

And you will cry out in that day because of your king whom you have chosen for yourselves, and the Lord will not hear you in that day.” Nevertheless, the people refused to obey the voice of Samuel…. (1 Samuel 8:18-19)

They wanted globalism, to “be like all the nations.” They said, “We don’t want God’s will. We’re going to choose,” and God allowed them to choose.

"When the righteous are in authority, the people rejoice; but when a wicked man rules, the people groan.” (Proverbs 29:2)

The choice is ours: rejoicing or groaning. Does America realize what desperate trouble we’re in? Can we not understand that God has taken down the hedge, and He’s no longer protecting America? Will rivers of tears, buckets of blood, and oceans of sweat be the price America pays for some of the wicked men and women we elected?

Just because wicked people make wicked choices and wicked rulers lead, God hasn’t forsaken control. Isaiah 40:24b declares, "When He will also blow on them, and they will wither, and the whirlwind will take them away like stubble."

God is still the King of kings.

"For God is the King of all the earth; Sing praises with understanding. God reigns over the nations; God sits on His holy throne." (Psalm 47:7-8)

Not only is He King of all the earth but “The Lord sits as King forever.” (Psalm 29:10). Be sure of this about Almighty God: you didn’t vote Him in and you won’t vote Him out. You’ll never impeach Him. Where God does not rule He will overrule if He chooses.

One day I had the privilege of having lunch with the late Corrie Ten Boom, that saint who suffered such persecution under the Nazis. I decided I’d talk very little and listen a lot. She said—and I’ve never forgotten it—“There is no panic in Heaven, only plans.” I hope that truth sinks into your heart. Isaiah 14:26-27 says there is control that God reserves for Himself:

Jesus is King over all the earth, King forever. Soon, when He comes to Earth again, He will be sitting upon David’s throne. Neither presidents, kings, prime ministers, dictators, legislators, House and Senate leaders nor Supreme Court justices can stop His hand—not any more than Pharaoh could stop Moses in the Exodus, as wicked as Pharaoh was. The Bible clearly teaches that God is over even those who don’t know Him. God has used even ungodly kings.

"The king’s heart is in the hand of the Lord like the rivers of water. He turns it wherever He wishes." (Proverbs 21:1)

I’m neither an optimist nor a pessimist—I’m a Bible believer. And I tell you, we are in desperate trouble. Oh, that there might be a mighty spiritual awakening in America! That we might repent! That we might choose righteously and pay attention to what God’s Word says is the standard for leadership!

No matter who gets elected in November, know this: the Holy Trinity never meets in emergency session. God is still in control. With Jesus Christ as my King, I have hope and a future that’s steadfast and sure in Him.

In Light of All This, What Should We Do?

Teach our children that life may not be like we had it.

Build character into your children for what they are about to face.

Be ready for Jesus’ arrival.

Dear God, I know that I am a sinner. I know that You love me and want to save me. Jesus, I believe You are the Son of God, who died on the cross to pay for my sins. I believe God raised You from the dead. I now turn from my sin and, by faith, receive You into my life as my personal Lord and Savior. Come into my heart, forgive my sins, and save me, Lord Jesus. In Your name I pray, Amen.

Did you pray that prayer? We’d love to celebrate with you! Click here for free resources & downloads.

Listen to the full message "The Leadership Crisis in America."

Did you find it helpful?
﻿