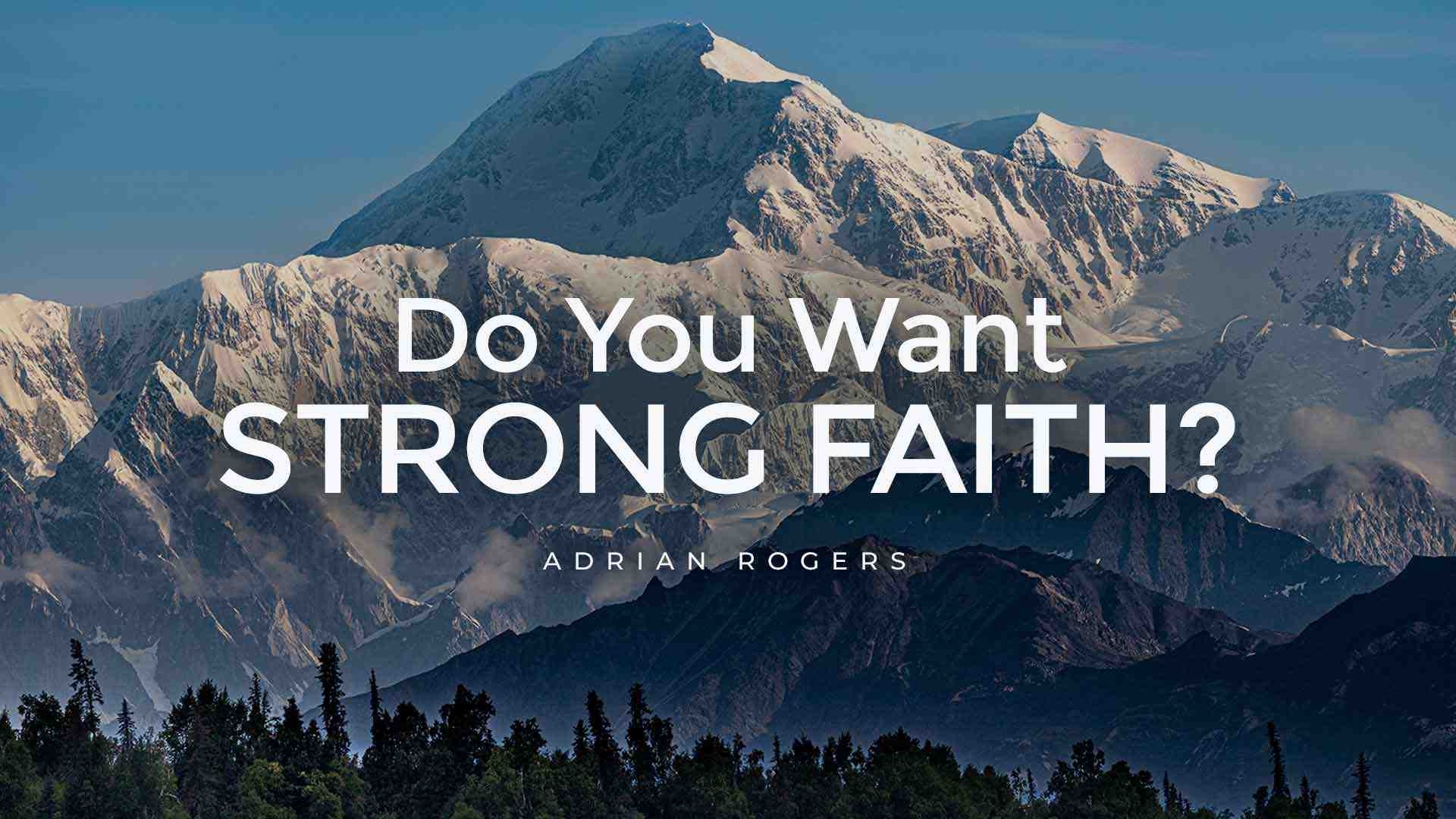 Do You Want Strong Faith?

Imagine two letters dropped into the same mailbox. One, smudged and dirty, has a stamp on it. The other, addressed impeccably, does not. Which letter will be delivered? You know the answer: the one with the stamp. In the Christian life, faith is that stamp. What does God look for in us? Faith. How can we have strong faith? Look at Abraham. What happened to him is a lesson for us. If we believe as Abraham believed, we will achieve as Abraham achieved. That’s what Romans chapter 4 is all about, and it’s written to encourage us.

When God called Abraham, He said, “Through you, all the nations of the world are going to be blessed.” God wanted Abraham’s descendants, the Jewish nation, to be a channel of blessing. God doesn’t bless you so you can sit, soak, and sour, but to make you a blessing. He will do that with you by your faith.

“For by grace you have been saved through faith, and that not of yourselves; it is the gift of God, not of works, lest anyone should boast” (Ephesians 2:8-9).

Anyone who puts his faith where God puts his sin—on the Lord Jesus Christ—can be saved. Faith is what enables us to live the Christian life. Some folks are stumbling and falling while others are victorious. Some are overcomers and some are overcome. What is the difference?

“And this is the victory that has overcome the world—our faith” (1 John 5:4).

Hebrews 11:1 tells us that faith assures us of things we expect and hope for. Faith convinces us of the existence of things we cannot see. Heaven is just as real to some folks as if they were already there, while for others it’s not real. Faith makes the difference. Faith isn’t a hunch, positive thinking, or believing “everything will work out.” Faith isn’t responding to feelings nor simply believing God “can.” Faith is knowing God will. Strong faith is deaf to doubt, blind to impossibilities. Faith takes God at His word.

When you read the Old Testament, you find Abraham made some industrial-strength mistakes. He wasn’t perfect by any means. But the New Testament mentions not one word about his mistakes. What God remembered Abraham for wasn’t his failure but his faith. It’s the stamp of faith God is looking for.

If you want to have strong faith, five things that were true about Abraham must be true about your faith:

1. Strong faith is received as a grace gift of God.

Therefore it is of faith, that it might be according to grace, so that the promise might be sure to all the seed [to all of Abraham’s descendants] not only to those who are of the law, but also to those who are of the faith of Abraham, who is the father of us all (as it is written, “I have made you a father of many nations”) in the presence of Him whom he believed [Abraham believed God]—God, who gives life to the dead and calls those things which do not exist as though they did [God brings something out of nothing]. (Romans 4:16-17; Bracketed phrases added for explanation)

We receive God’s promise by having faith, a free gift [by grace] to all of Abraham's descendants—and that means everyone who lives with faith like that of Abraham and believes as he did.

Write down, perhaps in the margin of your Bible, this definition of grace:

Grace is the unmerited favor and kindness of God shown to one who does not deserve it and can never earn it.

“And you He made alive, who were dead in trespasses and sins” (Ephesians 2:1).

There’s nothing in us that could generate faith. Grace is not the reward for our faith. God takes the initiative, reaches out, and gives all sinners the grace to have faith. Just as salvation is the grace gift of God, so is the faith to receive that salvation. He gives it to everyone. “God has dealt to each one a measure of faith” (Romans 12:3). God puts that faith in our hearts. He enables us to believe. Then it’s up to us to do the believing.

No one can claim, “Well, I just can’t believe.” Yes, you can, if you wish to. Faith is simply taking God at His word and responding to His promises in His Word. The Bible is chock-full of promises. But you must believe and receive. Dwight L. Moody, the Billy Graham of his day, said many years ago, “I stopped praying for faith and started reading my Bible. Faith burst aflame in my heart.”

The promise was based on faith (See Romans 4:16.); thus it’s guaranteed as God's free gift to all of Abraham's descendants—not just people who obey the Law, but everyone who believes like Abraham believed God. He is the spiritual father of all of us who believe.

We’re saved by grace, and faith links us to that grace. The only way grace can ever operate is through faith. Jesus paid for your sins on the cross, but that does you absolutely no good until you put your faith where God put your sins, upon the Lord Jesus Christ. Grace is released by faith, whereas unbelief holds grace a prisoner.

I can’t have any confidence in my own goodness, because I could never be sure I’m good enough. If you think you’ll earn Heaven by your good works, I’ll guarantee you’ll never be sure. You’ll always be wondering, “Have I done enough?” When you understand it’s all by His grace, then you can be sure: “Praise God, I know I’m saved.” It’s by grace that it might be sure.

Neither Abraham nor Sarah could have a child without God’s intervention. Strong faith doesn’t look at the problem, it looks to God. Abraham respected the greatness of God. Their son Isaac was a miracle birth.

Paul mentions two things (among many) God specializes in that no one else can do. “…God, who gives life to the dead and calls those things which do not exist as though they did” (Romans 4:17).

Only God raises the dead.
Only God brings life out of death, something from nothing.

If your faith is weak, you need to get to know God by reading His Word and through prayer. Glance at your problem, but gaze at God.

“And those who know Your name will put their trust in You, for You, Lord, have not forsaken those who seek You” (Psalm 9:10).

Do you think there’s no hope? That God is finished with you? Or never got started? “With God, all things are possible” (Matthew 19:26). Abraham looked at God, who can bring life out of death and said, “I’m going to believe in that God.”

Don’t look at yourself, your problems, or say you’re hopeless. You aren’t. Humble yourself. Stop trying. Become “nothing,” and He will make something out of you.

Abraham had to choose between two impossibilities: that he could have a child, or that God could lie. He chose the first one, and Isaac and the entire Jewish people were the outcomes. God did exactly as He said because God cannot lie.

Genuine faith doesn’t sit back and say, “Well, God, You said You’ll do it, so that’s all there is to it.” No, Abraham and Sarah had a role to play as well. What God promises, God does, but God did it through Abraham and Sarah. By faith, Abraham obeyed. (See Hebrews 11:8.)

Faith is more a verb than a noun. The difference between belief and faith is that faith is belief with legs on it. Strong faith not only believes God can, but it believes God will, and God will do it by me.

Two things here seem to be at odds with one another. Remember, Abraham was justified by faith—by believing God—but James 2:22-23 says Abraham’s faith was made perfect by his works. Now, which is it? Are James and Paul contradicting each other?

You’re not saved by faith and works, but by a faith that works.

You’re justified by faith alone, but the faith that justifies is never alone; it’s always accompanied by works. If your religion hasn’t changed your life, you’d better change your religion. “If anyone is in Christ, he is a new creation” (2 Corinthians 5:17).

When God does something in your heart and life, it will be seen. Faith without works is dead. (See James 2:20 and 26). Abraham and Sarah, because of their faith, responded to the guidance of God. Faith acts upon what we know to be true. We faithfully obey. If you have Paul’s faith, you’ll have James’ works; they simply go together.

Abraham “did not waver at the promise of God through unbelief, but was strengthened in faith, giving glory to God, and being fully convinced that what God had promised, God was also able to perform” (Romans 4:20-21).

Your unbelief doesn’t glorify God. The greatest thing you can do to glorify God isn’t to give huge sums of money or go overseas as a missionary. Believing God is what glorifies Him most. Faith says, “God, you are trustworthy.”

Don’t talk at length about your belief in a good, strong God, and then fail to believe Him. Strong faith glorifies God.

In its last three verses, Romans chapter 4 says it wasn’t written just for Abraham or the Jewish nation, but for all of us. Abraham believed God could bring death out of life and make something out of nothing.

Do you believe God raised Jesus from the dead? Do you believe He can make something out of you? Then you can be saved. That’s it. I promise you on the authority of the Word of God, if you believe in the Lord Jesus Christ, you will be saved. And it’s by grace so you can be sure. Isn’t that good? Isn’t God good?

How to Be Strong in the Faith Outline and Transcript