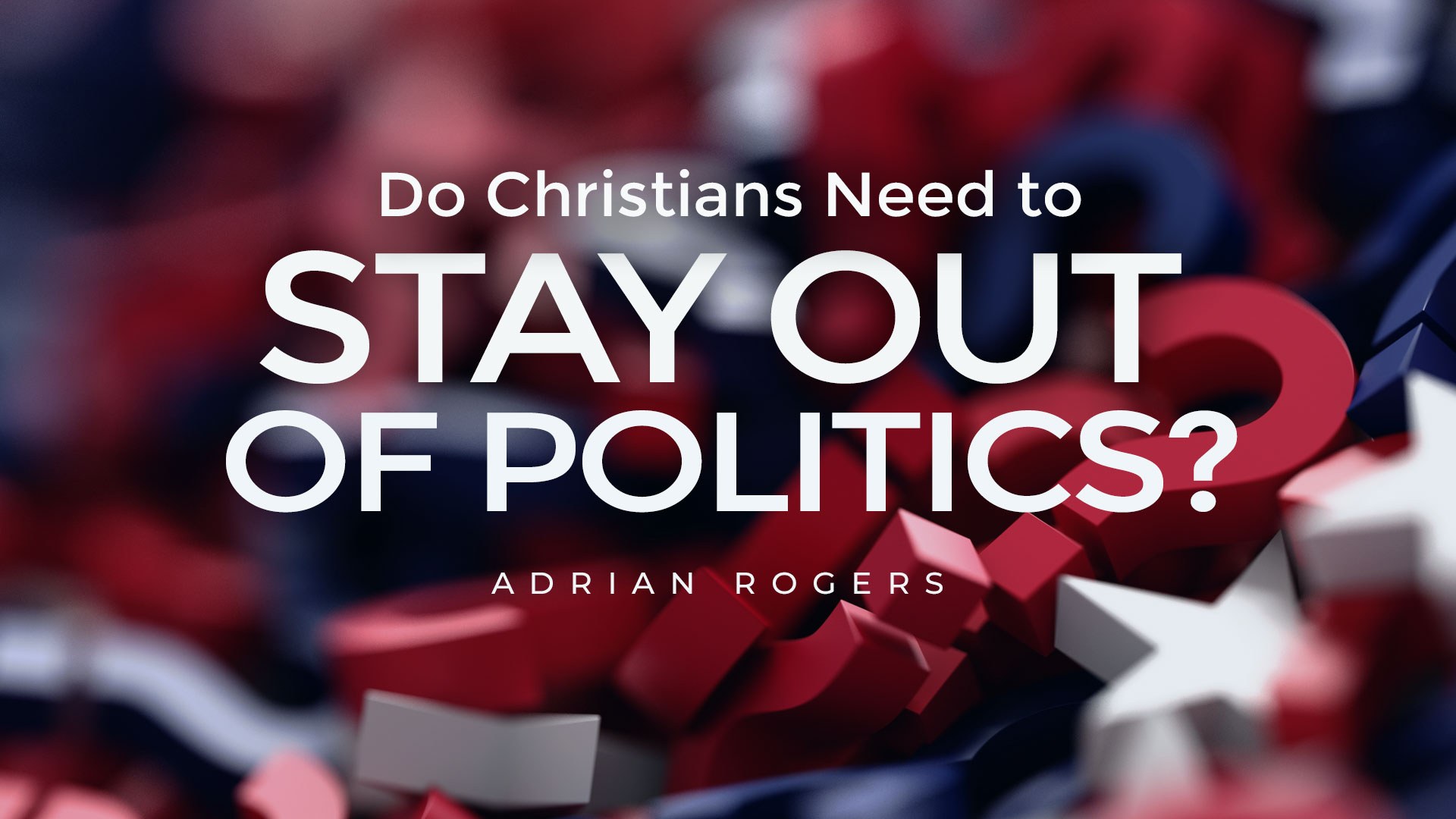 Do Christians Need to Stay Out of Politics?

What does God say about Christian citizenship—our responsibilities, duties, and rights? Is the Bible against Christians participating in politics? On the other hand, would God ordain human government, then tell His people to stay out of it? What are Christians to do? How should we think and behave in this very public arena?

Many Christians have simply dropped out, seeing their involvement as somehow “the social gospel,” substituting culture for Calvary. They fear if we get involved in politics, all we’re doing is making the world a better place to go to Hell from.

Other believers drop out because they’ve given up hope thinking that America has passed the point of no return. They’re just waiting for Jesus to come rescue them.

And others see politics as dirty, thinking it would defile them:  Our kingdom is not of this world, so we’ll just stay away.

Some have been intimidated by the ACLU, which daily distorts the truth about “separation of church and state.” These cowering believers think because we’re Christians, we have no rights—we’ve been disenfranchised. The ACLU says, “Why don’t you shut up and go back inside your little stained-glass prisons? Leave it to us.”

Where will we find the answers? Will we allow self-serving politicians to co-opt the church, use us for their purposes, and intimidate the church so they can have their way? Are politicos going to tell us what’s right or wrong, or humanists and secularists who don’t believe in Christ? Will we take direction from some egg-headed philosophe

Christians will get the answers in the Word of God. Our question is not “Should we be involved in government issues?” but “Can we be a Christian and not be involved?” Romans 13:1-7 speaks clearly about Christian citizenship.

Romans 13:1 says, "The authorities that exist are appointed by God." Daniel 2:21 tells us, "He removes kings and raises up kings."

Did you realize God sets kings up and God brings kings down? Sometimes, like Nebuchadnezzar, they’re wicked. Daniel had an opportunity to bravely tell him where his power came from:

You, O king, are a king of kings. For the God of heaven has given you a kingdom, power, strength, and glory. (Daniel 2:37)

Yet Nebuchadnezzar was far from godly! In fact, he got so full of himself, God had to judge him, and he ended up crawling around on all fours, eating grass. God raised him up but had to bring him down.

Pharaoh was another—a wicked, malevolent murderer of little babies. But Romans 9:17 says, "For this very purpose I have raised you up, that I may show My power in you, and that My name may be declared in all the earth."

Pilate, a weak-willed politician, didn’t have the moral courage to release Jesus. Instead, he washed his hands of Him. Jesus said to Pilate, "You could have no power at all against Me unless it had been given you from above" (John 19:11).

All three were wicked, yet God gave them power. When Paul wrote Romans 13, Caesar was the authority in Rome. Christianity was illegal because Christians wouldn’t say, “Caesar is Lord.” Nevertheless, Paul wrote, “The authorities that exist are appointed by God” (Romans 13:1).

Get this in your heart and mind: God ordains human government for two reasons:

"Therefore, whoever resists the authority resists the ordinance of God, and those who resist will bring judgment on themselves" (Romans 13:2).

"For rulers are not a terror to good works, but to evil. Do you want to be unafraid of the authority? Do what is good, and you will have praise from the same" (Romans 13:3).

Our Founding Fathers and framers of our Constitution were soaked in the Word of God. They wrote that government is to “promote the general welfare,” and “provide for the common defense.” Where did they get such wisdom? Right out of the Scripture we’re reading today.

The Requirements of Christian Citizenship

What are Christians’ rights and responsibilities as citizens? The Apostle Paul mentions several:

Therefore, you must be subject, not only because of wrath but also for conscience’ sake. For because of this you also pay taxes, for they are God’s ministers attending continually to this very thing. Render therefore to all their due: taxes to whom taxes are due, customs to whom customs, fear to whom fear, honor to whom honor. (Romans 13:5-7)

When religious leaders tried to trap Jesus with the political question “Is it right to pay taxes to Caesar?” He answered, “Render therefore to Caesar the things that are Caesar's, and to God the things that are God’s” (Matthew 22:21). This is key to understanding our responsibility as Christian citizens. Our Constitution’s framers knew this. Far from “separation of church and state”—which is not in the Constitution—they wrote, “Congress shall make no law respecting the establishment of religion, nor prohibiting the free exercise thereof.” That’s exactly what Jesus was saying. They knew our rights come not from government but from God, and you don’t separate government from God.

Government must be free to restrain evil, so the church can be free to preach the Gospel. The church is not the servant of the state or the master of the state, but the conscience of the state. We’re here to hold up a standard of truth.

Are you a Christian? You have these duties:

Jesus paid His taxes; you should pay yours. Ever-increasing taxes are a burden. When half the people get the idea they don’t have to work because the other half will take care of them, and the other half sees it’s no use to work because somebody else gets what they work for, that government is on its last legs. Excessive taxes are sinful and dangerous. But we are to pay for our government.

“Should I pray for my leader if he’s wicked?”

Pray for him all the more! God can change a ruler, remove a ruler, and overrule a ruler. "The king’s heart is in the hand of the Lord, like the rivers of water. He turns it wherever He wishes" (Proverbs 21:1).

Our greatest Christian responsibility is not in the White House but in the church house and your house, praying for our leaders.

4. Preach to your government.

God’s people dare not be silent. Nor should we identify the Christian faith with either the Democrat or Republican party. We must tell both to repent and get right with God.

Nathan counseled David. Elijah confronted Ahab. Eleazar warned Jehoshaphat. Daniel spoke to Nebuchadnezzar. Moses warned Pharaoh. John the Baptist preached to Herod. Christians must say to the government, “Whatever is morally wrong is not politically right.” As long as the government legalizes killing babies, practices infanticide, and tries to normalize sexual perversion, I won’t be silent.  Be civil, but don’t be silent.

5. Participate in your government.

Our government is “of the people, by the people, for the people.” If you don’t participate, get informed, and vote, you’re disobeying the Lord Jesus Christ (Matthew 22:21). If God ordained human government, then told His people to stay out, who does that leave to run it?

We’re not here to start riots or kill unbelievers. We’re a republic, having representative rule by law. The direction our government will take is decided by public opinion. Our goal must be to change public opinion. The only way we’ll change it is through the living, powerful Word of God.

We must get the Gospel out into the public square. We’re not going to out-argue the lost. They’re blind, they don’t see it. They’ve got to know Jesus Christ. We’re to persuade people, winning them back one at a time, bringing them to Christ.

That’s where the power is. It’s not political influence we need, it’s the power of God. If we change America, we’ll change politics.

Pray for America right now: “Oh, God, America deserves judgment, but we need mercy. Bring this nation, Lord, back to You. Maybe the crises we see today are tokens of Your love to bring us to our knees. God, we need You in America.”

How to Pray for America

A Nation in Crisis

It’s Time to Pray for America