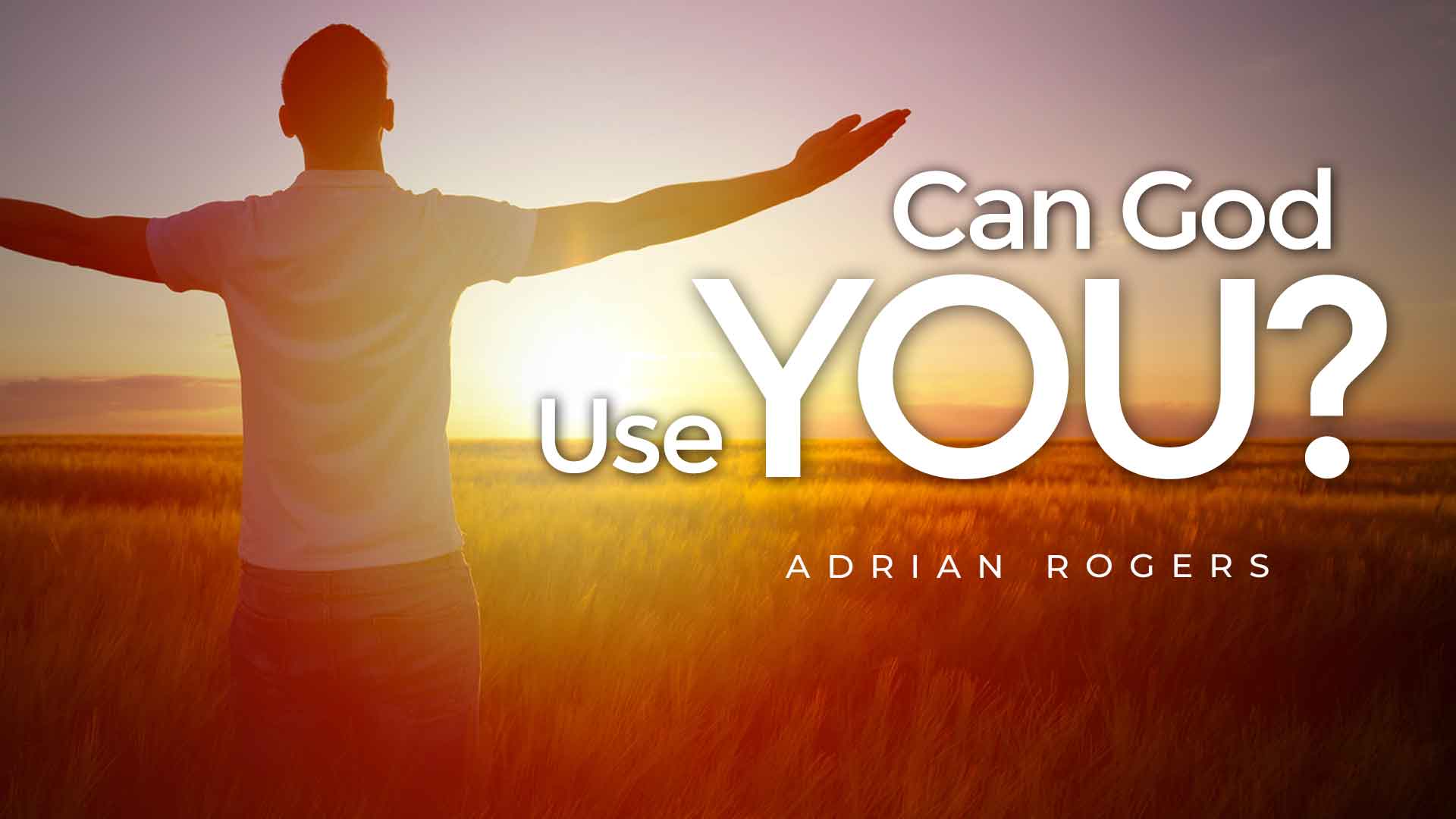 Can God Use You?


This article is based on Pastor Adrian Rogers' message, People God Uses.

Do you want God to use you? Don’t answer lightly—it may change your life.

Look at another Hebrews 11 champion of faith: Gideon. “The Angel of the LORD appeared to [Gideon], and said to him, ‘The LORD is with you, you mighty man of valor!’” (Judges 6:12; word in brackets added). To Gideon, this may have sounded like sarcasm. He was not a mighty man.

“Gideon said to Him, ‘O my lord, if the LORD is with us, why then has all this happened to us? And where are all His miracles…? But now the LORD has forsaken us and delivered us into the hands of the Midianites.’ Then the LORD turned to him and said, ‘Go in this might of yours, and you shall save Israel from the hand of the Midianites. Have I not sent you?’” (Judges 6:13-14).

The people of Israel were in trouble because of their sin, but they blamed it on God. They had given up and hunkered down. Many Christians are the same—just waiting for Jesus to get here. But God is alive and well, and is able to do in this age what He has done in any age.

If you are not being used by God, you are living in rebellion. God did not save you to sit idle. Do not dare insult God by saying God cannot use you!

Gideon said, “‘O my Lord, how can I save Israel? Indeed my clan is the weakest in Manasseh, and I am the least in my father’s house.’ And the LORD said to him, ‘Surely I will be with you, and you shall defeat the Midianites as one man’” (Judges 6:15-16).

Judges 6:34 says “the Spirit of the LORD came upon Gideon.” God put on Gideon like a suit of clothes. People don’t do anything for God; God does something through them.

There was idolatry in Israel at this time, and the worst kind: Israel worshiped Baal, the “fertility god,” by practicing fornication, adultery, and child sacrifice. (Baal is not dead! That demon is alive and well today.)

The Lord said to Gideon, “Take your father’s young bull, the second bull of seven years old, and tear down the altar of Baal that your father has, and cut down the wooden image that is beside it; and build an altar to the LORD your God on top of this rock in the proper arrangement, and take the second bull and offer a burnt sacrifice with the wood of the image which you shall cut down” (Judges 6:25b-26).

God will not use you if there is an idol in your life. An idol is anything you love, serve, or fear more than God. “If I regard iniquity in my heart, the LORD will not hear” (Psalm 66:18; read also Isaiah 52:11).

To be clean is not a hard requirement, because “the blood of Jesus Christ His Son cleanses us from all sin” (1 John 1:7b). Gideon’s sacrificed oxen represented the blood of Christ.

Gideon was not a mighty man of valor; God was going to make one out of him.

Gideon called for an army to fight Midian and received 32,000 volunteers. But God said, in effect, “They are too many. You will think you got victory without me.” (Read Judges 7:2.) “Now therefore, proclaim in the hearing of the people, saying, ‘Whoever is fearful and afraid, let him turn and depart at once from Mount Gilead.’ And twenty-two thousand of the people returned, and ten thousand remained” (Judges 7:3). If you are afraid of what might happen, you will not be used. Fear is infectious. (See Deuteronomy 20:8.)

How to Get Rid of Fear

• Power. Yes, you are weak. But He is strong. God’s power is not merely for pastors, but for laymen, homemakers, and high-schoolers.

• Love. If someone you love is threatened, you will see how your courage grows! The question is not how brave are you; it is, how much do you love?

• A sound mind. By the Word and the power of God, you see things as they are, and you are not intimidated by the devil.

This does not mean we can dream up anything and ask God to rubberstamp it. But “the people who know their God shall be strong, and carry out great exploits” (Daniel 11:32b).

First courageous, now cautious? There is no contradiction.

God told Gideon, in effect, “You still have too many. I will test the army more.”

“So he brought the people down to the water. And the LORD said to Gideon, ‘Everyone who laps from the water with his tongue, as a dog laps, you shall set apart by himself; likewise everyone who gets down on his knees to drink.’ …Then the LORD said to Gideon, ‘By the three hundred men who lapped I will save you, and deliver the Midianites into your hand’” (Judges 7:5,7a; emphasis added).

Some put their mouths down to the water. This made them vulnerable. But others lifted their hands full of water to their mouths and kept watch. God said, “Let the careless go home.”

Do not compromise, or trifle, with sin. The devil is waiting for you to slack up. (See 1 Peter 5:8). The Apostle Paul said, “I discipline my body and bring it into subjection, lest, when I have preached to others, I myself should become disqualified” (1 Corinthians 9:27).

“The LORD said to him, ‘Arise, go down against the camp…and you shall hear what they say.’ And when Gideon had come, there was a man telling a dream to his companion. He said, ‘I have had a dream: To my surprise, a loaf of barley bread tumbled into the camp of Midian; it came to a tent and struck it so that it fell and overturned, and the tent collapsed.’ Then his companion answered and said, ‘This is nothing else but the sword of Gideon the son of Joash, a man of Israel! Into his hand God has delivered Midian and the whole camp.’ And so it was, when Gideon heard the telling of the dream and its interpretation, that he worshiped” (Judges 7:9-15a).

Barley bread was the poorest, coarsest of bread. That’s Gideon—the nobody. But God used him. When Gideon heard that he already had the victory, he had confidence.

Christians, stop praying for victory and begin praying from victory, which we already have in Christ. (See 1 Corinthians 15:57.) Have confidence! But not confidence in yourself. Gideon saw himself as barley bread, but he saw that mighty God had used him.