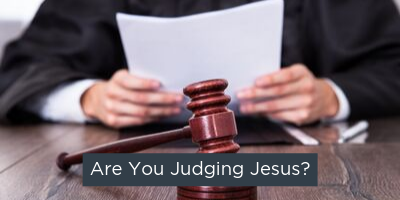 Are You Judging Jesus?

Just before Jesus was crucified, He stood trial before Pontius Pilate to be judged. His sentence would mean life or death. The bogus charges He was arrested under left Pilate wondering just what Jesus had done to create such a stir. Pilate then asked the world’s most important question—a question every person must answer. “What will I do then with Jesus, which is called Christ?” Should I be judging Jesus?

Pilate found himself in a situation where, as governor of Judea, he would either sentence Jesus to death for no crime at all, or set Him free—risking a local uprising that could end his career and possibly his life. At the very least, Rome might recall him in disgrace.

What a choice. In one hand, Pilate held an innocent man. In the other, a raging mob.

Pilate must judge: “What shall I do with Jesus?”

He couldn’t know it then, but one day Pilate himself will stand trial before Jesus. Back then, Pilate had Jesus in his hands. Now, Pilate is in the hands of Jesus.

The same is true of each of us. You and I must judge as well. No greater question demands an answer.

In a real sense, Pilate represents every man, woman, boy and girl on earth. As Jesus stood before Pilate, so Jesus stands before you. As Jesus was in Pilate’s hands, Jesus is in yours. As Pilate will one day stand before Jesus, so will you.

What happens to you on that Day of Judgment depends on how you answer the greatest of all questions: What will you do with Jesus? Not what someone else will do, but what you’re going to do. Your destiny hangs on your answer.

If you say, “Nope, I won’t choose,” you don’t get that choice. If you say, “I’m not going to decide,” you just made a decision.

Everyone will either accept or reject, confess or deny, crown or crucify Jesus. And in so doing, they will be judging Jesus. No one can be neutral. You will do something.

With Jesus standing right before him—Jesus, the unavoidable, inescapable, inevitable fact of life—Pilate made a tragic decision. Don’t make the same mistake.

Many voices confronted Pilate that day.

The voice of reason

You don’t get to be the Roman governor of Judea by being a fool. Pilate read the motivations of the religious leaders and knew these were false charges (Matthew 27:18)

To crucify Jesus, you must also crucify reason. Reason spoke to Pilate, and it’s speaking to you. If you examine the evidence and listen to the witnesses, you will judge Jesus Christ to be the Son of God, worthy of all honor, glory, majesty, and praise.

The voice of a loved one

For reasons we don’t know, Pilate’s wife had such a disturbing dream, she interrupted the trial to plead for Jesus’ life (Matthew 27:19). Perhaps you’ve had a loving father, mother, friend or spouse who’s pleaded with you to do the right thing about Jesus Christ.

The voice of conscience

Pilate judged Jesus to be innocent (v. 23). His conscience thundered within. Perhaps you’ve never made a decision about Jesus. Reason says you should. Loved ones say you should. Your own conscience tells you to do the right thing with the Lord Jesus.

The voice of Jesus Himself

“Jesus answered, ‘Thou sayest that I am a king. To this end was I born, and for this cause came I into the world, that I should bear witness of the truth.’’” John 18:37

Jesus speaks to you today out of the pages of His Word. You must face His voice.

The crowd clamored for Pilate to release a criminal and crucify Jesus (Matthew 27:20). Pilate read the polls. He pacified the mob (Mark 15:15). Are you so concerned about public opinion you’d reject Jesus to please the crowd?

His pride clouded his judgment. Pilate said, “Why are you silent? Don’t you know who you’re talking to? I have the power of life and death over you!” Just to be clear, that wasn’t factually true. Jesus calmly replied, “You have no power but that which was given you from above” (John 19:11).

Pilate had a cushy job. Whatever buttered his bread determined his conduct. If he didn’t make the politically correct judgment, he could lose everything (John 19:12). Do you fear making Jesus your Lord because it would cost you? You say, “Hey, I have to live.” No, we all must die, and after that, face God.

Shift it to someone else.

Fence-straddling Pilate wanted the Jews to make the decision. He even tried to get Herod to take responsibility.

You hope simply ignoring Jesus will be the solution. Sin is personal and so is your decision. Nobody can make it for you.

Many people try this route: “I believe Jesus was a great man, a great teacher.” If you find no fault in Him, and yet don’t acknowledge Him as your Lord and Savior, what kind of person are you?

Pilate thought he could simply wash his hands of the whole matter (Matthew 27: 22-24). He literally took out a basin and washed his hands. An ocean of water couldn’t wash Jesus’ blood from Pilate’s hands. You can’t be neutral. Not to judge is to judge. Jesus said, “He that is not with Me is against Me” (Matthew 12:30).

When the gavel fell in Pilate’s court, another gavel fell in Heaven; when Pilate let Jesus be condemned, Pilate was condemned. You cannot be neutral concerning the Lord Jesus Christ.

HOW WILL YOU JUDGE JESUS CHRIST?

Imagine a courtroom where Jesus is in the prisoner’s dock and you’re the jury. I’ll call some witnesses.

· I call John the Baptist, of whom Jesus said, “No greater man was ever born than John the Baptist.” John, you’ve known Jesus since childhood. You baptized Him in the Jordan River. What’s your testimony?

· I call Simon Peter to the witness stand. Peter, what can you tell us about Jesus?

· I call the Apostle John, a deep thinker. John, what’s your conclusion?

“And the Word was made flesh and dwelt among us, and we beheld His glory, as of the only begotten of the Father, full of grace and of truth.” (John 1:14)

· Doubting Thomas—you were always skeptical—please take the stand. After His resurrection, you saw in person the nail prints in His hands and side. How do you judge Him? Thomas bows reverently and says,

· Martha, Jesus spent many happy days in your home in Bethany. You observed Him in all situations. Tell the court what you think of Him.

· Let’s hear from some of His enemies. I call a Pharisee to testify. Why did you want him to be crucified?

· Caiaphas, you were the high priest. Why did you want Him crucified?

· I call to the stand the Roman centurion. Soldier, you witnessed the hours Jesus hung on the cross. You helped nail Him there. You heard His every word. You watched Him die. What do you say about Him?

· Judas, you sold Him for thirty pieces of silver. What say you?

· Pilate, you had Him crucified. Tell us what you think.

· I humbly call the final witness: Almighty God, the Father. Please tell us, who is Jesus?

This is the testimony of God Himself. Almighty God reversed the decision of the court and raised Him from the dead.

“And He is shown to be the Son of God with power by the resurrection from the dead.” (Romans 1:4)

I believe this testimony. The early disciples believed it. Many died for their faith. People may live for a lie, but few will die for a lie. People tell lies to get out of trouble, not into trouble. They were totally convinced Jesus is the Son of God.

Now it’s time for you to judge. You’ll decide either to crown Him or crucify Him, acknowledge or reject Him, receive or deny Him. You will make a decision. You cannot wash your hands. You cannot be neutral. What will you do with Christ?